Dec 09 Comments Off on F.W de Klerk: Adieu to a Man Who Was Pivotal in Transforming the History of Africa Away from Disaster Copy

F.W de Klerk: Adieu to a Man Who Was Pivotal in Transforming the History of Africa Away from Disaster

As an undergraduate and graduate student, I was very passionate about the eradication of apartheid from South Africa. My ecstasy was at the rooftop when General Olusegun Obasanjo, a.k.a Baba OBJ, as former Head of State of Nigeria, included me on the trip to familiarize his Nigerian government sponsored delegation of about ten on the peace process in South Africa with a view of recommending on how Nigeria can help. Thinking of meeting the duo of Mandela, well known freedom fighter and President F. W. de Klerk, with the latter having boldly announced to the world that he had a turn-around to become a leader with great vision, was beyond my comprehension. 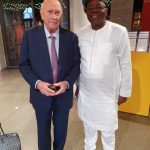 On arriving at what was the Jan Smuts International airport in Johannesburg in the evening of September 10, 1991, we were received by late Dr. Alex Boraine who at the time led an NGO known as Institute for Democracy in South Africa (IDASA). He later joined South Africa’s Truth and Reconciliation Commission (TRC) as Archbishop Desmond Tutu’s Deputy.  Of course, the South African Foreign Ministry was also on hand to receive us.

Dr. Boraine had developed an elaborate programme for our delegation, the highlights of which included a visit to Thokoza. There was every reason to be afraid. Thokoza – a black Township East of Johannesburg was the place where violence had erupted just before our visit. The Township was a big difference from the opulence we had seen in Johannesburg. There, our delegation faced guns from the South African state with the Regimental Sergeant Major on duty telling us we could not go into the Township without police protection and officials on the ground insisted they had not received the order to accompany us. Trust OBJ, the soldier in him took charge. He issued commands and gave the order that we go into the Township without police protection and would be accompanied by African National Congress (ANC) and Inkatha Freedom Party (IFP) representatives on the ground. The former agreed to join us as the latter politely declined.

The 1991 atmosphere in South Africa was charged as the White South Africans were not convinced of the vision of President F.W. de Klerk. They were worried about losing their privileges. The black South Africans equally had little or no trust for the announced intentions of F.W. de Klerk, who by trajectory was an apartheid Chief Priest, but now drumming support for anti-apartheid. The rainbow people could not see as far as F.W. de Klerk who has today been proven right by history. We must salute a courageous man that F.W. de Klerk was. He pushed along undaunted. He was convinced that he must put South Africa on the path of peaceful change.

as opposed to violent and destructive change. Of course, there was an economic imperative as the ANC military wing was improving in the use of violence that was driving capital away from apartheid South Africa.

After our Thokoza visit, Mr. Pik Botha, the Foreign Minister at the time, gave us a working lunch that further exposed us to the complexities being faced by F.W. de Klerk as a National Party leader pushing for change in South Africa. From lunch we went to Shell House to meet the ANC. The ANC was represented by a high-powered delegation made up of Oliver Thambo, Nelson Mandela, Walter Sisulu, Thabo Mbeki, Cyril Ramaphosa, Barbara Masekela, Aziz Pahad and Jacob Zuma. They briefed us on the next steps and emphasized that the National Party and FW de Klerk were not serious on change. They swore that they and Mandela would not meet with F.W de Klerk anymore and asked us to communicate that to the State President who we were to meet in the evening.

That same evening we went to the presidential palace. We were inordinately kept waiting. OBJ asked for the bathroom and I followed him. It was a complex building. We accidentally took a wrong turn and as we tried to find our way we bumped into the big honcho, Madiba Nelson Mandela alone, using the back door out of the State House to avoid our delegation. He greeted us. I asked OBJ what was happening. Didn’t Mandela, earlier in the day send us strong messages to President de Klerk that he would no longer meet with him? How could he be secretly visiting de Klerk? OBJ responded that that was diplomacy and I must not tell anyone on the delegation about what we saw. I guess, it is now safe to tell after 30 years about those two gentlemen leaders privately trying to find answers as their respective supporters thought the way forward could only be conflictual. That event says a lot about the fact that they both were great leaders who really deserved the Nobel Prize for Peace.

I subsequently had some closer interactions with F.W. de Klerk out of office. I got to know more of the inspiring leader he was, thanks to the late Prime Minister of Bahrain H.R.H. Prince Khalifa bin Salman Al Khalifa who died a year to the same date of the demise of F.W. de Klerk, i.e., on 11/11 the date on which World War I ended. Just as that of HRH Prince Khalifa bin Salman Al-Khalifa meant a great end of an era in the Gulf, that of F.W. de Klerk marks a great end of an era in Africa.

HRH Prince Khalifa bin Salman Al Khalifa had invited a number of Nobel Laureates to Bahrain in September 2018. So, he was one of the invitees that also included Lech Walesa, former President of Poland who had started as a Trade Union activist who transformed Poland, nay Eastern Europe. I was invited to the meeting as Special Adviser to H.E. Jose Ramos-Horta, Nobel Laureate and former President of East Timor. I met F.W. de Klerk with his beautiful wife and David Steward, I extend my heartfelt condolences. I wish them great strength to bear such huge personal loss. It was very clear that F.W. de Klerk was a great humble man.

We met again at Oslo at the invitation of Sheikh Husam Al-Khalifa, the immediate past President of the Court of the Prime Minister of Bahrain. We had many pleasant moments at a Bahrain organised seminar as well as tours of the city, including a visit to the Nobel building. The unassuming friendly and humble nature of F.W. de Klerk was impressive. He engaged without the normal airs of many African former Presidents.

This detailed story is to remind us that Africa and humanity lost one of the greatest contributors to change in twentieth-century Africa. President F.W. de Klerk was a great leader who was the last Head of State in the white minority era of South Africa, but played a very significant role in dismantling the apartheid system that he had benefitted from. He introduced universal suffrage and led the South African National Party from 1989 to 1997.

Until his end, he was committed to the rule of law in South Africa, through the work of the F.W. de Klerk Foundation, which he founded in 1999. He was also the Chairman of the Global Leadership Foundation. He had established this in 2004 to focus on promoting democratic leadership, conflict resolution by mediation, promotion of good governance, human rights and rule of law.

The last President under apartheid left a final apology in a video dubbed his final message which was released immediately after his death. He showed remorse for the pain inflicted on non-white races during the era of apartheid. We must thank David Steward, de Klerk’s friend/right-hand man for the video. Therein, F. W. de Klerk said: “I, without qualification, apologize for the pain and the damage that apartheid has done to Black, Brown and Indians in South Africa”. For many, and myself, this video corrects the earth splitting position he took last year when he told a national broadcaster that he did not believe apartheid was a crime against humanity, as declared by the United Nations.

De Klerk’s historic achievement of peacefully overturning an authoritarian regime remains more appreciated elsewhere than in South Africa, at least amongst many Africans. President F.W. de Klerk showed understanding at the crucial moments and seized the opportunity that presented itself to put South Africa on the path of embracing all its peoples. A difficult path that is still a long walk to freedom. Events last year, as in earlier times, showed clearly that democracy is not just repetitive voting at elections. It has to do with having responsible and accountable people who are able to push a vast number of citizens towards Utmost Freedom, a sort of paradise on earth that can be approximated by the full implementation of the UN’s Sustainable Development Goals (SDGs).

Former Deputy Special Representative of the UN Secretary-General to Somalia &