At the sidelines of the General Assembly, was the witnessing of the signing of a letter of understanding between the Secretariat of His Royal Highness Prince Khalifa bin Salman Al Khalifa Sustainable Development Award and the Kailash Satyarthi Children Foundation. This letter of understanding is expected to result in a better world for children in general, and those under all sorts of bondage, in particular, which has been the passion of 2014 Nobel Peace Laureate Kailash Satyarthi.

The breakfast summit titled: Promoting the Culture of Peace with Love and Conscience sponsored by FOWPAL and the Kingdom of Bahrain, was a rare opportunity to express a wish for love and peace in the world and become the 311th leader from around the world to ring the FOWPAL gold plated 205 kg peace bell. The symbolic bell has been going around the world since 2002. 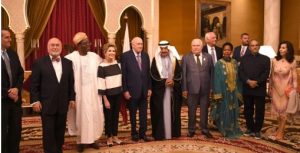 Persistence of Corruption in Nigeria: Towards a Holistic Focus